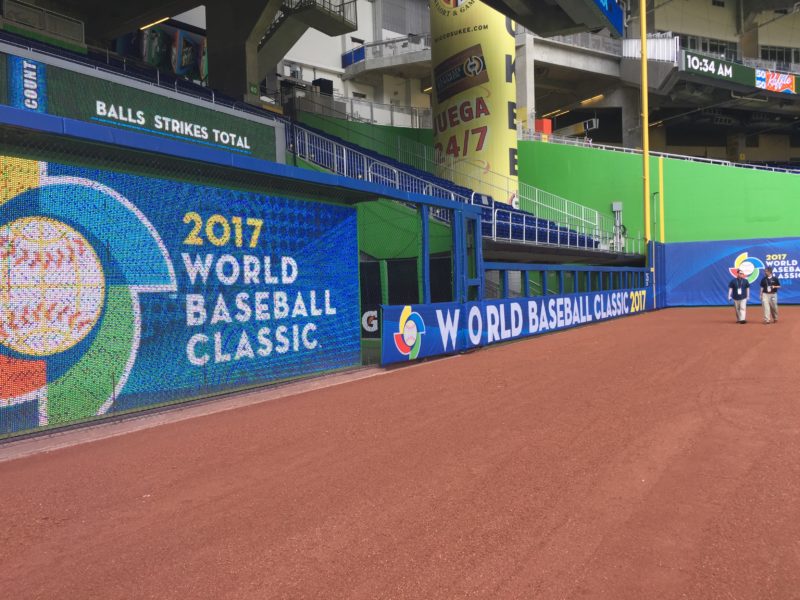 When you think about the World Baseball Classic Miami, what thoughts come to mind? Churros. Hot dogs. Beer. Screaming fans. Ball caps. It’s baseball season! While we can’t help but get caught up in the excitement of catching a game in person and building out our fantasy teams, the AAA Flag & Banner team is also busy designing and installing eye-catching large-format graphics that transform your favorite stadiums into immersive experiences for fans and rivals alike.

For more than 20 years, AAA Flag & Banner has worked with major league baseball (MLB) to create buzz and an environment and ambiance that captures the lively spirit of the MLB. In order to get a better idea of all of the work that goes into revamping these arenas to fit event visions, we touched base with two of our account executives from Miami, Retta and Neca Logan.

This year, AAA Flag & Banner was awarded the contract for the World Baseball Classic in Miami, San Diego and Los Angeles, in addition to the MLB All-Star game in Miami. Retta and Neca were happy to share a little insight on just what it takes to pull off these large-scale transformations.

“You kind of have to think of the World Baseball Classic Miami like it’s the Olympics for baseball,” said Retta. “The Marlins Park stadium needed to be completely overhauled with graphics and wraps that represented the MLB’s royal blue, a stark contrast from its usual bright green coloring. The installation process took about four to five days, in which time our highly skilled installation team brought new stadium graphics to life, wrapping the interior and exterior of the ballpark, the ticket window and store, the main entrance and the West Plaza. For the World Baseball Classic, it was important that all of the stadiums they traveled to throughout the country were uniform in graphics, and we were able to accomplish that flawlessly.”

This was the third Baseball Classic that AAA Flag & Banner has done for the MLB, and it’s not all we will be doing for them this season! After the World Baseball Classic Miami, Marlins Park stadium was reverted back to its original state … but it won’t stay that way for long.

“They [the MLB] are going big for the All-Star Game,” Retta said. “This year the All-Star event will take place from July 7-11, but our professional installation team will start transforming the city well before then.”

Beginning June 1, AAA Flag & Banner will start decorating the downtown Bayfront Park and Domino Park with light pole banners, decals and beyond in order to immerse the city in MLB décor. Following the parks, the team will also take on vamping up the Miami Beach Convention Center with light pole banners for its five-day Fan Fest. Afterward, the team will begin roadway banner installation on June 10.

Something unique about this year’s All-Star event, Retta said, is that — for the first time ever — the MLB will have a “clean zone.” The City of Miami pushed through legislation that will keep away street vendors and limit advertising around Marlins Park and the satellite events downtown. This means the clean zone will not only help prevent ambush marketing activities, but also give the MLB a strong, dominating and all-encompassing presence free from competition. With this zone, AAA Flag & Banner’s team will be able to completely transform the space to dazzle and engage fans in a full MLB-centric experience.

Whew, after all of that, it sounds like our AAA Flag & Banner team deserves to chow down on some nachos while shouting, “hey batter, batter, batter!” There’s nothing better than getting lost in an experience, and our team pulls out all the stops to make it happen!